Move the Nuclear Weapons Money and a Video Clip during the Opening Event with We, The World Founder: Rick Ulfik 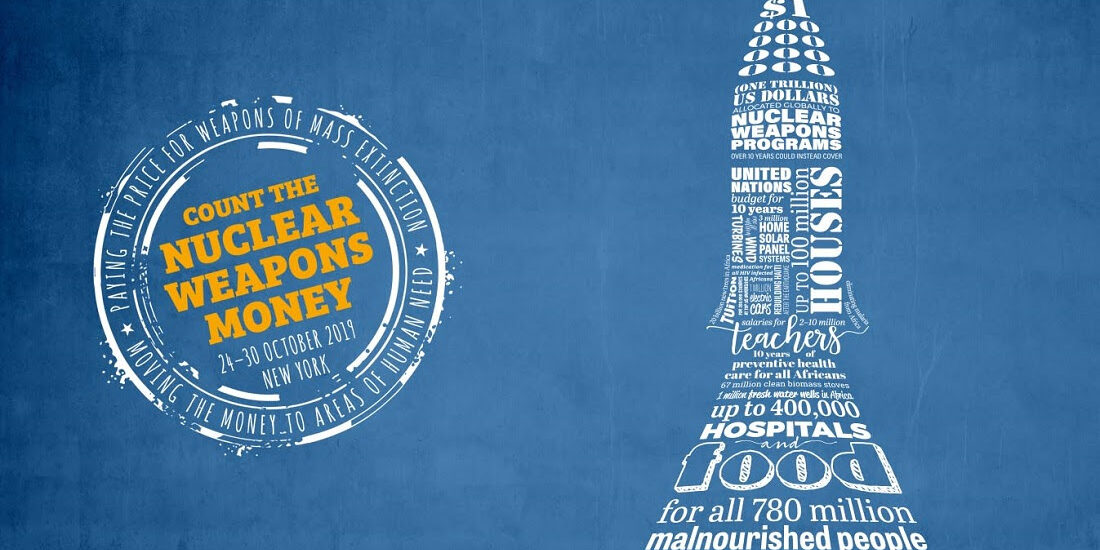 In order to show the magnitude of the nuclear weapons budget, peace and disarmament volunteers in New York yesterday began counting out $1 trillion dollars in one million mock notes of $1million each.

The counting started at a press conference at the United Nations and continues for the next six days at the Count the Nuclear Weapons Money Hub in the Chelsea neighbourhood of New York City (504 West 22nd Street at 10th Ave).

‘It’s unbelievable, every second counting $1 million, an amount that would fund our organisation for 20 years. We have counted for 10 hours so far, and we have only scratched the surface of the nuclear weapons budget,’ says Christopher Salata, Co-founder of Peace Accelerators and one of the four volunteers running the counting at the Hub. ‘Already our fingers are geting sore from the counting.’

Nuke money counting kicked off at the United Nations

Counting of the nuclear weapons money started at the United Nations at a press conference yesterday attended by the UN press corps.

The campaign is endorsed by leading voices of legislators, religious leaders, youth, artists, climate activists, former military leaders, peace and disarmament campaigners and others from around the world.

“Climate change, the militarization of space and cyberspace, the fight against inequalities and new technologies of artificial intelligence: those should be the priorities for our governments,” says General Bernard Norlain (rt.), Vice-président d’Initiatives pour le Désarmement Nucléaire and former Air Defense Commander and Air Combat Commander of the French Air Force. “It is therefore indecent to see that it is for nuclear weapons, and that colossal funds are spent every year, neglecting the most important dangers to our security.”

‘If we divert the spending of the nuclear weapons money to improving the conditions of life of millions of people around the world we reduce the risk of a war and we spread happiness and contentment,’ says Ela Gandhi, Founder of the Gandhi Development Trust and grand-daughter of Mohandas Gandhi. ‘This will then result in a safer more beautiful world for all.‘

In Philadelphia, the Granny Peace Brigade Philadelphia organised a counting of $2.5 billion at the City Hall Courtyard. The counting included spirited singing of Granny Peace Brigade songs including We are a gaggle of Grannies: ‘ We are a gaggle of grannies, urging you off of your fannies, we’re telling you now, we’re angry and how, no more nukes. With all that government spending, to create weapons that are unending, we’re going for broke, this isn’t a joke, no more nukes!’

In New Zealand, Louisa Wall MP (Labour, PNND Deputy Chair) and David Carter MP (National, former Speaker of the Parliament) led an event that was organised in the parliament by the United Nations Association of New Zealand, and attended by representatives of other peace organisations including World Beyond War. Click here for videos of the New Zealand event.

$13 billion being counted in New Mexico

In New Mexico, there was a money counting at Taos Plaza, Taos organised by Concerned Citizens for Nuclear Safety. New Mexico, with a specific focus on shifting the nuclear weapons money to protecting the climate.

‘Many Americans and especially climate protectors are starting to make the cause and effect connection of the corporate military-industrial complex to climate destruction,’ says Suzie Schwartz, representing Taosenos for Peaceful and Sustainable Futures. ‘Billions of taxpayer money are being directed toward nuclear armaments that could instead be reallocated to climate protection, just transitions, and sustainable development goals rather than the threat of nuclear annihilation.’

Another three counting events are planned in New Mexico over the week.The State hosts a number of nuclear weapons facilities including LANL in Los Alamos, Sandia National Laboratory (SNL) in Albuquerque and the Waste Isolation Pilot Plant (WIPP) where plutonium-contaminated wastes generated by the nuclear weapons complex are disposed. New Mexico is also the State where the first nuclear weapons test was undertaken – at the Trinity Test Site on July 16, 1945 – near Socorro.The citizens are counting $13 billion in 13,000 mock bills at Taos Plaza,  the State Capitol Roundhouse (Oct 25), Socoro Plaza Gazebo (Oct 26) and Los Alamos National Laboratory (Oct 28).

See $13 billion of public money to be counted for peace at New Mexico nuclear weapons facilities.

There was an opening event at the Hub last night, moderated by Christopher Salata from Peace Accelerators, and including speakers from peace, climate action and disarmament groups, as well as an exhibition Project Holocene by artist Russ Ronat depicting endangered species and peace songs led by the Granny Peace Brigade.

Author: We, The World

Global Giving Reverse the Trend: Save Our People, Save Our Planet
April 19, 2020

Being and Doing Summit: Practicing in the Midst
April 19, 2020